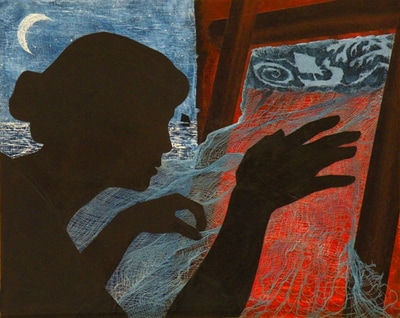 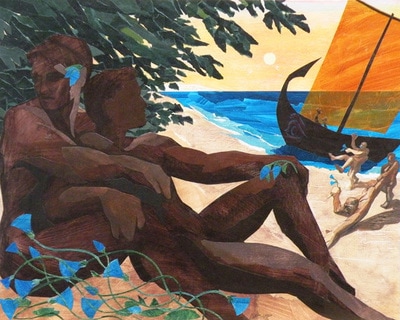 "The Land of The Lotus Eaters" 16"x20" Collage painting on panel. Contact me to purchase. 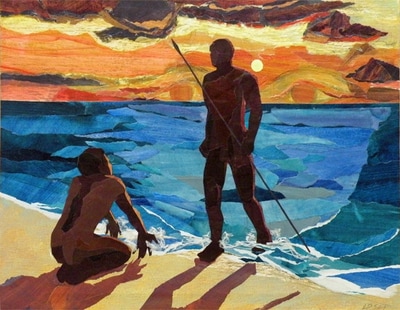 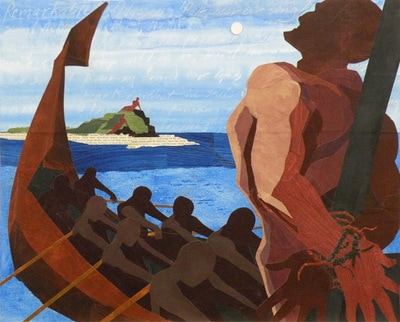 "The Song of The Sirens" 16"x20" Collage painting on panel. Contact me to purchase. 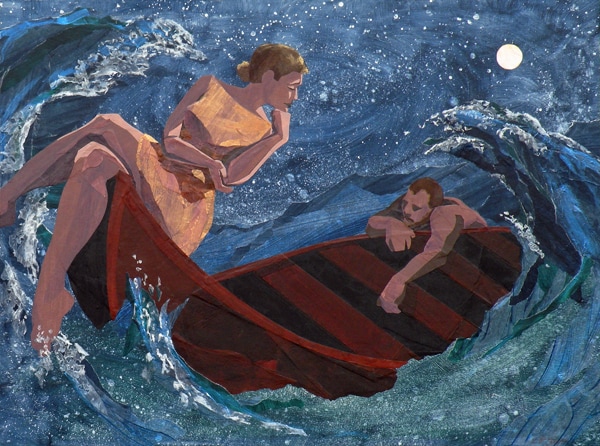 "Ino and Odysseus Have a Chat" 24"x32" Collage painting on panel. SOLD.
Art Statement for "The Odyssey":

I love being connected to the past. There is something about it that delights and inspires me infinitely. Finding bits and pieces of another time which I get to reassemble with bits and pieces of my own time to recreate a reality of my own imagination, my own making. My reality, my fantasy. It is an interaction, a co-creation.

Classical literature opens a door into my imagination. It has a cadence that is different than how we use language today. It is simple and rich. The details are succinct and non-superfluous. Ancient stories are the foundation of all our other stories. It is part of our cultural, psychological heritage.

The Iliad and The Odyssey are two of the major cultural building blocks of western society. The character and incidents in it have been borrowed from and built upon ever since. It is one of the original Hero stories. Odysseus is the classic trickster hero. Its elements are reflected in almost every story you will read or watch.

In his work “Poetics“, Aristotle reduces this epic poem to 3 sentences:
“...The story of The Odyssey can be stated briefly. A certain man is absent from home for many years; he is jealously watched by Poseidon, and left desolate. Meanwhile his home is in a wretched plight—suitors are wasting his substance and plotting against his son. At length, tempest-tossed, he himself arrives; he makes certain persons acquainted with him; he attacks the suitors with his own hand, and is himself preserved while he destroys them. This is the essence of the plot; the rest is episode.”

This is the bare bones of The Odyssey. But I’d have to say that the “episode” of it is the part that delights. He confronts monsters and gods, love-starved goddesses, foreign people with strange abilities, drama, romance, heartbreak, daring feats, deceptions, politics, comedy, this story has got a bit of everything.

When I first set out to do this series, I had no idea what it would look like. I considered trying to make each piece be reminiscent of Greek vase painting, with its limited palette of black, red and yellow ochre, and its magnificent stylization and simplification of forms. But when I read The Odyssey I envision the Mediterranean Sea, the sun, the white sand, the “wine-dark sea”. The seduction of unlimited color and deep space prevailed.

I hope you find these scenes as seductive, funny and fascinating as it is for me to create them.