How Film Noir Inspires My Art

I am an artist. Artists take input and use it as grist to generate unique output.

So, I feel I must ask myself, why noir? Why do I feel myself drawn to this imagery?

The hey-day of this film genre is roughly the 1940’s and 50’s. But, the term "Film Noir" was coined by French film critics later, in the 1960’s. At the time, they were simply known as “crime pictures” inspired by American hardboiled crime fiction. They were largely “B” movies with a tight budget.
The term “noir” has since expanded to not just describe a moment in movie history, but to describe a sensibility, that can be infused into any form of expression.

Why Noir? Begin the Béguin

How did I start my film noir obsession? 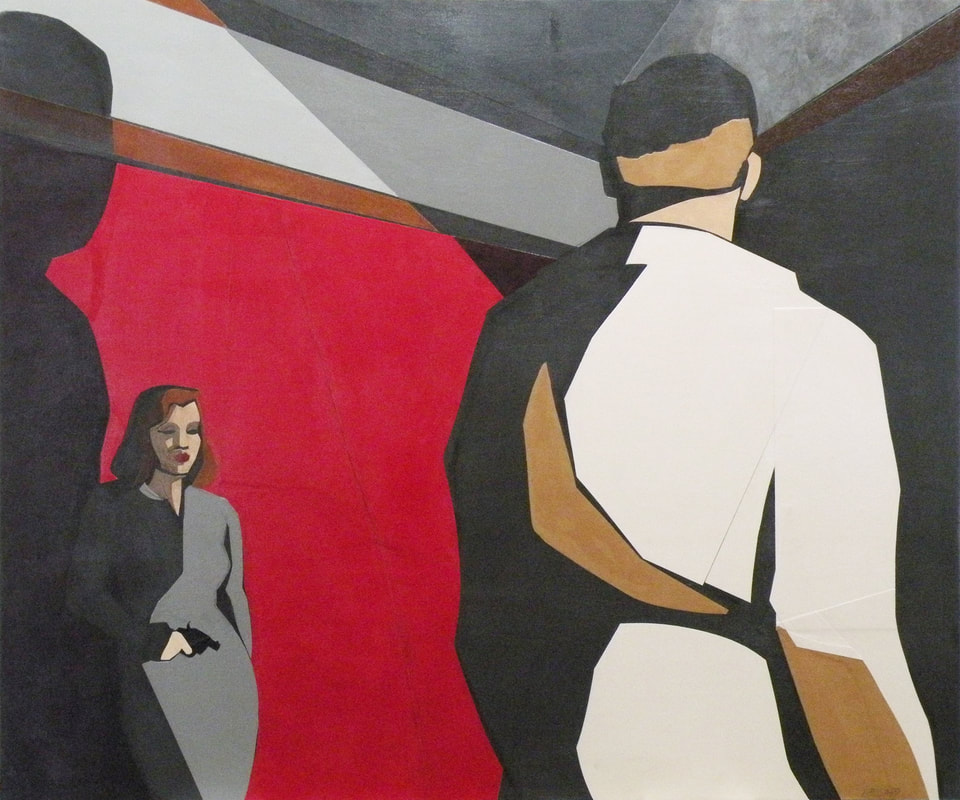 ©lesliepetersonsapp Fatale 30x36 Collage on panel
At first, I created my art directly from screenshots of films.  They were very altered, but from specific scenes. Gradually, the images kept getting more and more altered, until I started to create my own scenes. 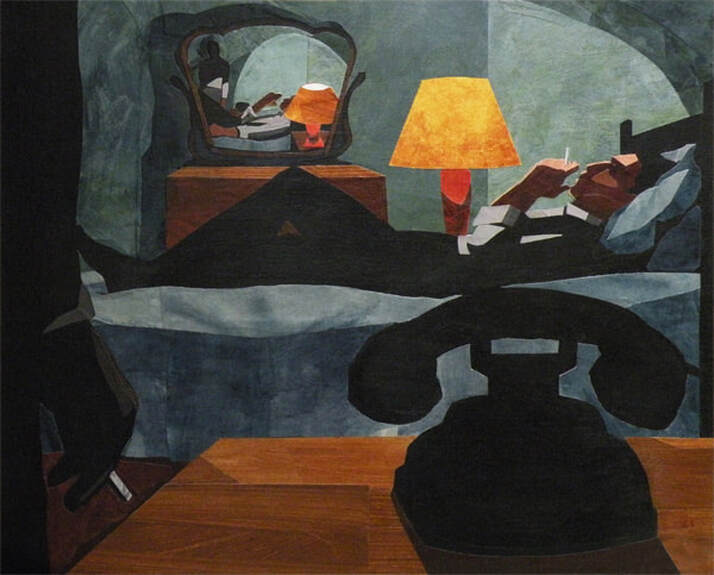 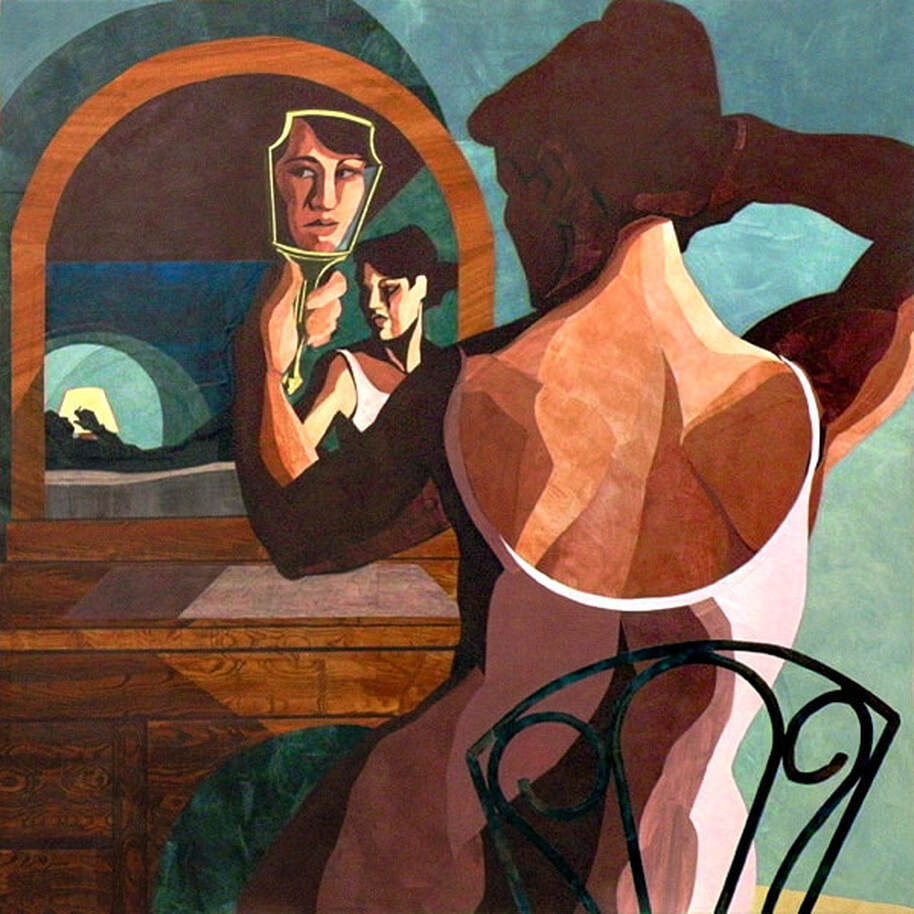 ©lesliepetersonsapp Blue Room 40x40 Collage on panel
Now, ideas emerge from multiple sources. I may be inspired from a film scene or photograph, or I may want to express something from my own imagination. The people I paint are slivers of my own soul, maybe even archetypes of our collective soul. 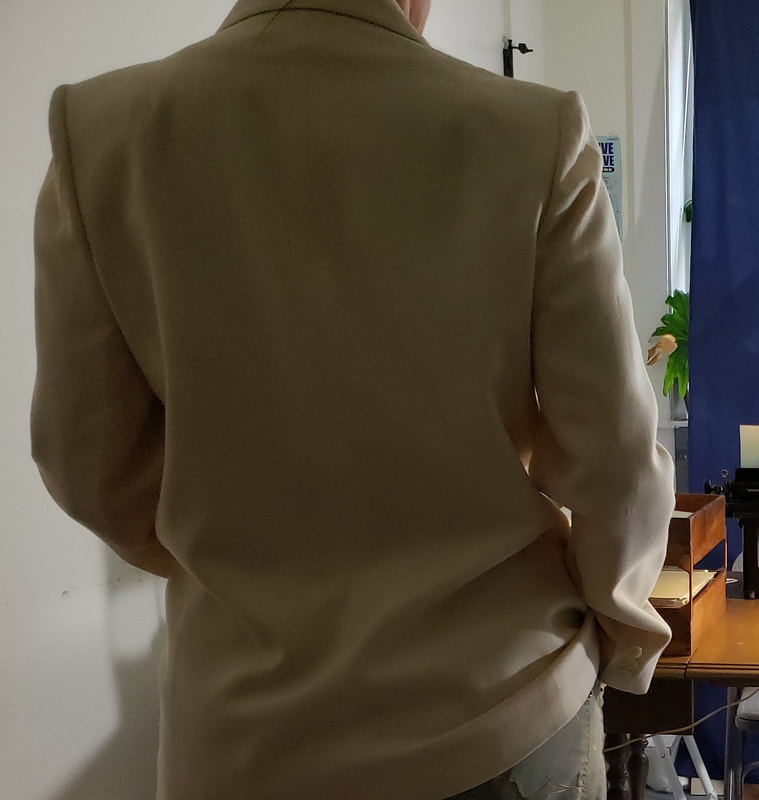 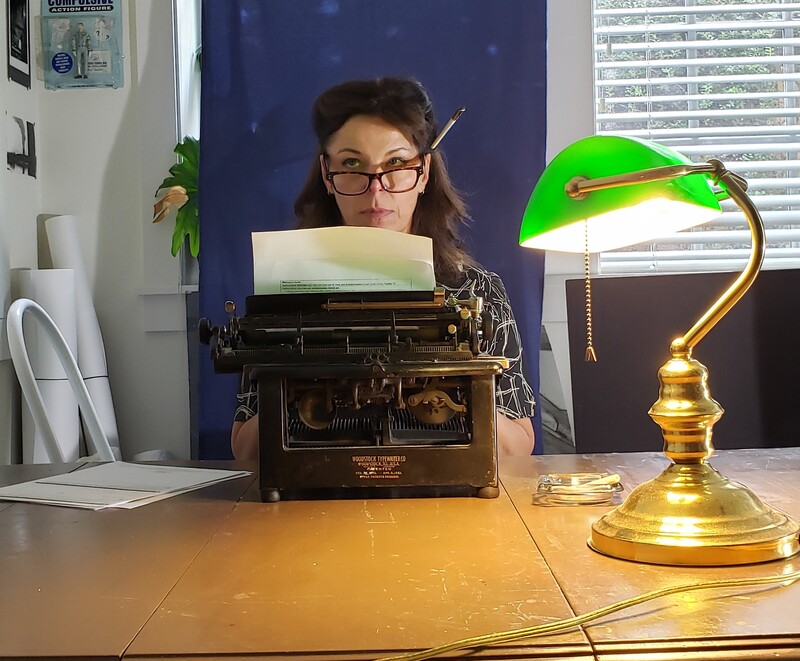 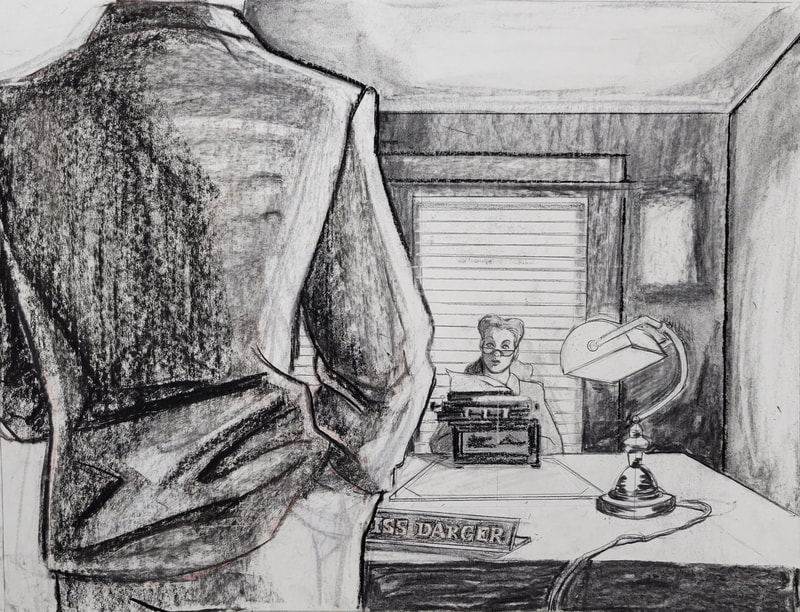 The scenes in my artwork are presented without irony and are imbued with an immediacy which invites the viewer to step into the scene as a contemporary moment. If we could walk through the picture frame and become part of the action. If this could be possible, what would you see, and who would be there? 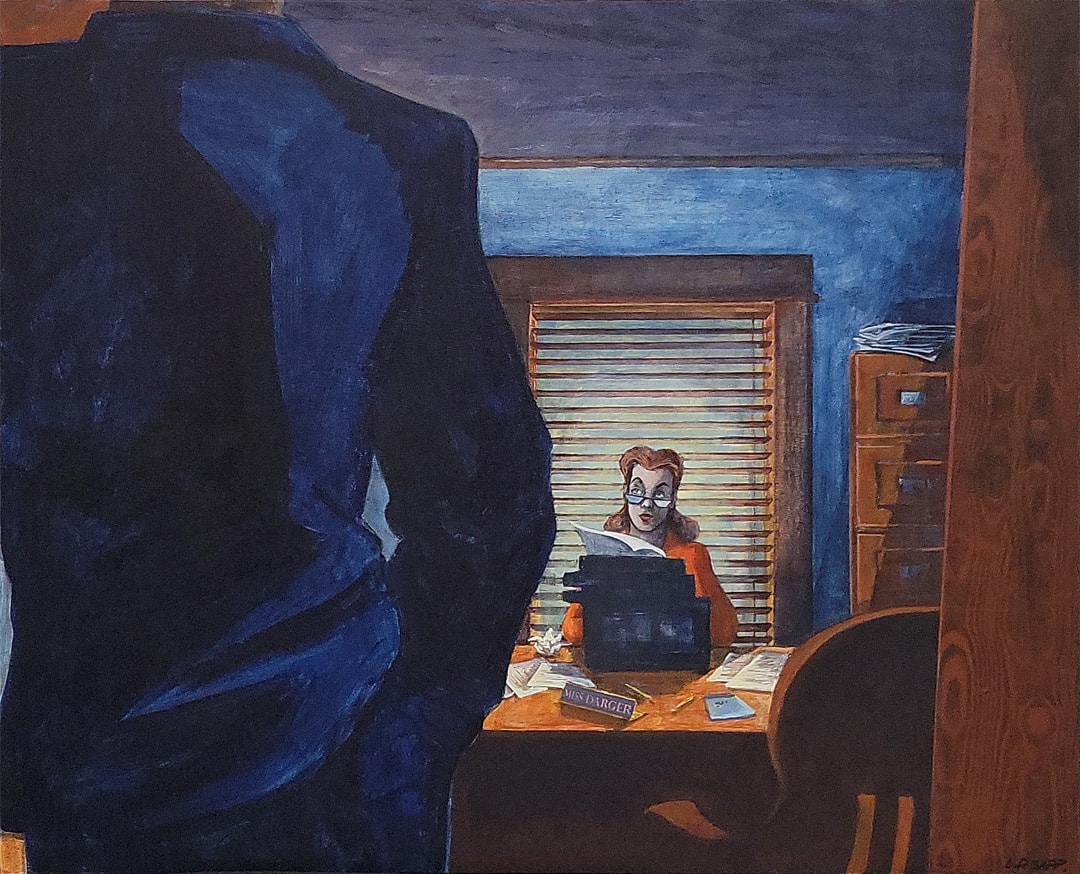 Why Noir?
Studying Film Noir Makes Me a Better Painter

I have become better at marshaling the elements of design, such as value, arrangement, and scale. I believe these skills transcend any specific style and will translate to other subjects as my creative interests evolve.

Why Noir? The Art and Style of the Era

Any artist will tell you, the key to artistic maturity is to discover one's own unique, consistent language. I seek to find a balance of representation and abstraction.

Modern Art, and design in the Modernist period dealt with this specifically.
While experts say Modernism died with the onslaught of WWII, I think it was a part of the cultural zeitgeist well afterwards, especially in popular culture. 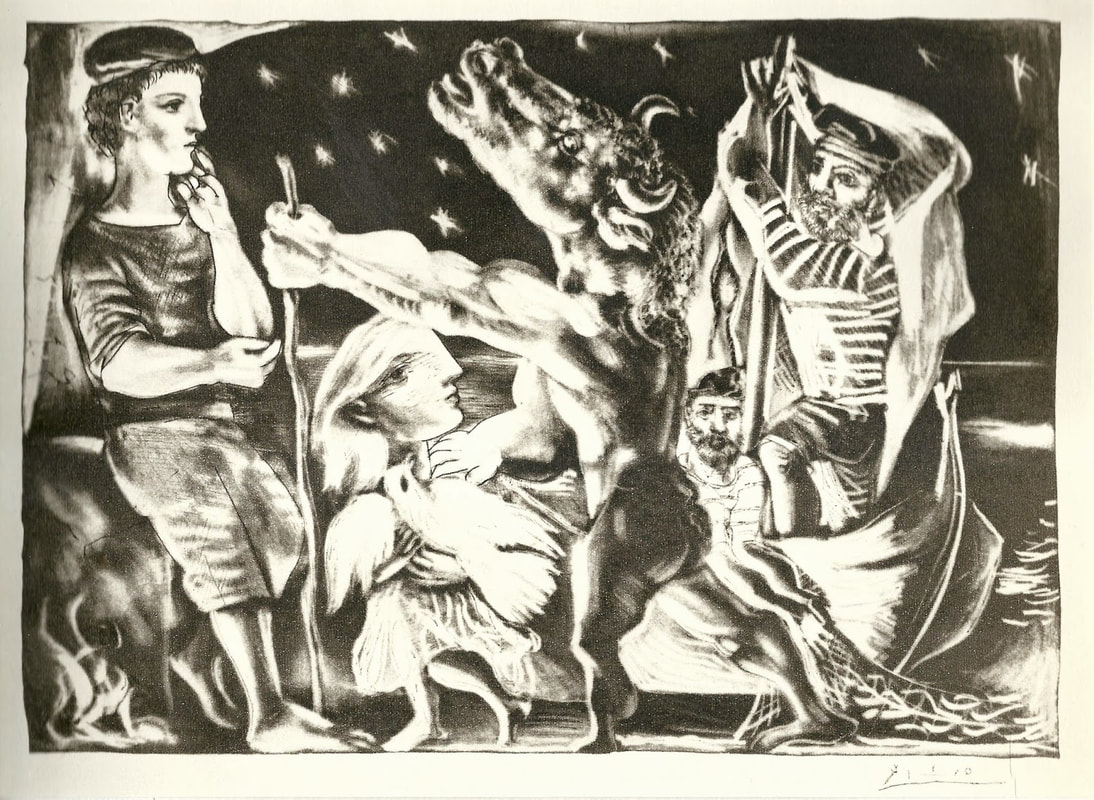 Blind Minotaur Led through the Night by Girl with Fluttering Dove, Picasso, 1935
My style is evocative of the painting and graphic arts that were contemporary with the hey-day of film noir. So, not only do I learn from films noir directly, I also love the style of the era, and let this inform the way I choose to depict the subject.

Much like how I engage with the subject of film noir, I like to find the essence of what I am seeing and try to express it with forthright simplicity. 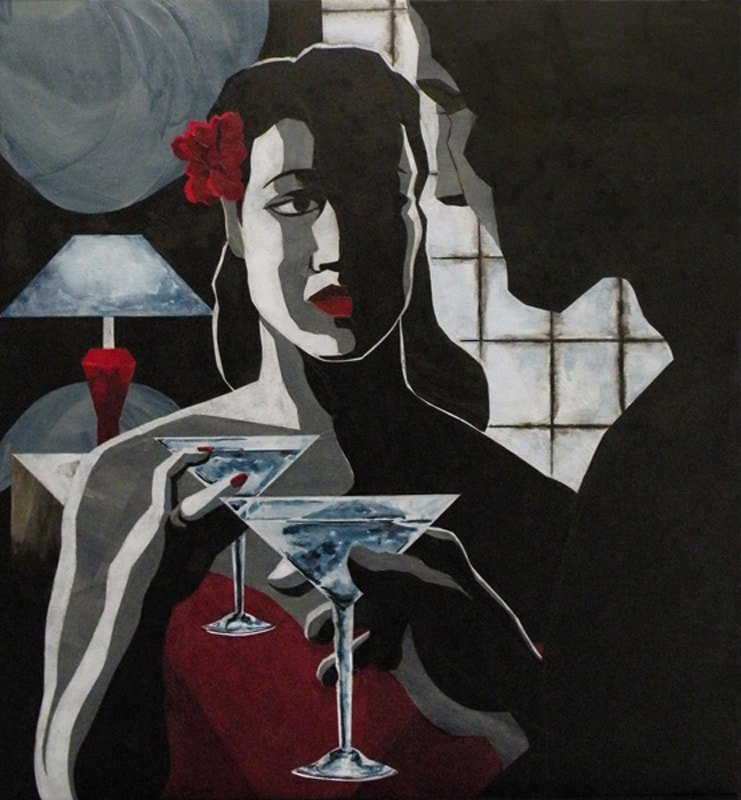 Why Noir? The Femme Fatale

Put them both together, and it becomes:

Femme Fatale:⁠
1. a seductive woman who lures men into dangerous or compromising situations⁠
2. a woman who attracts men by an aura of charm and mystery⁠
The word “nemesis” is often used to refer to an arch enemy or polar opposite, or, as my friend Merriam-Webster sez, “a formidable and usually victorious rival or opponent”.
But if she is so evil, why do we love her so much?
Be good, be patient, look pretty and maybe the prince will come and save you. I was taught that as a girl, it was the foundation of my world view and identity. I had no examples of powerful, non-domestic women in my life. Into this vacuum stepped the only example of feminine power available to me: the Femme Fatale.
She is trying to flip a bad situation to her advantage, perhaps turning the tables of power back on the men who use and control her. For me, the Femme Fatale is often infused with a tragic quality: a resourceful gal, just trying to make the best from a bad hand dealt.
In the course of my personal maturity, I am finding my way to a healthier embodiment of power. It has taken most of my adult life to build up some understanding of how to be an entrepreneur, which is essentially what a professional artist is.

I’ve had a lot of catching up to do.

But all the while, I still rejoice in the cathartic glorification of my dark princess, the lost twin star, our nemesis, the Femme Fatale. 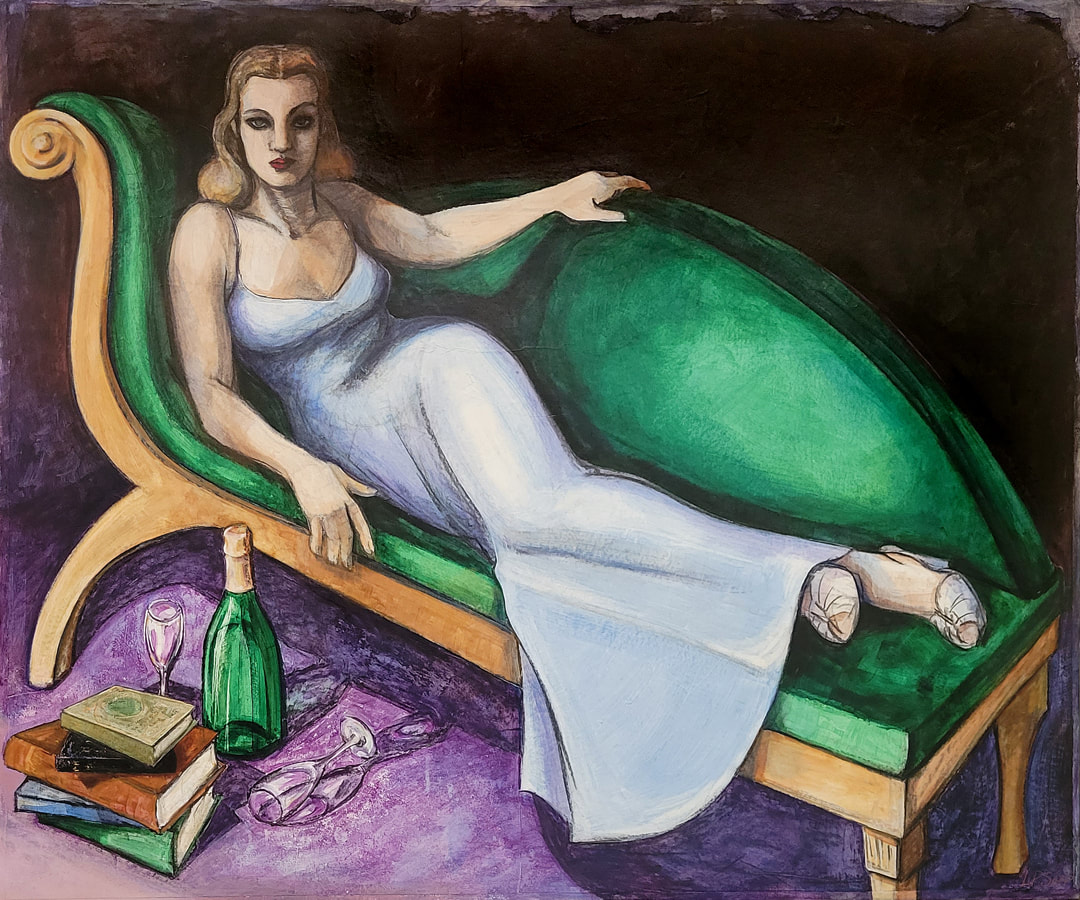 ©lesliepetersonsapp Boudoir II 40x48
For Extra Credit!
A fabulous article: In Defense of Villainesses, by Sarah Gailey- so much fun!

Why Noir? The Antihero and The Homme Fatale

How many times have you said to yourself, "this is a bad idea,"- then went ahead and did it anyway?
This is the essence of the typical male protagonist in film noir. A guy who is presented with a choice, and even though it is a bad idea, he goes forward with his instincts, his craving, his desire, his compulsion, his desperate need, instead of what we know would be the right choice. He must live, or die, by that fateful decision.

We watch the drama unfold, unable to look away. 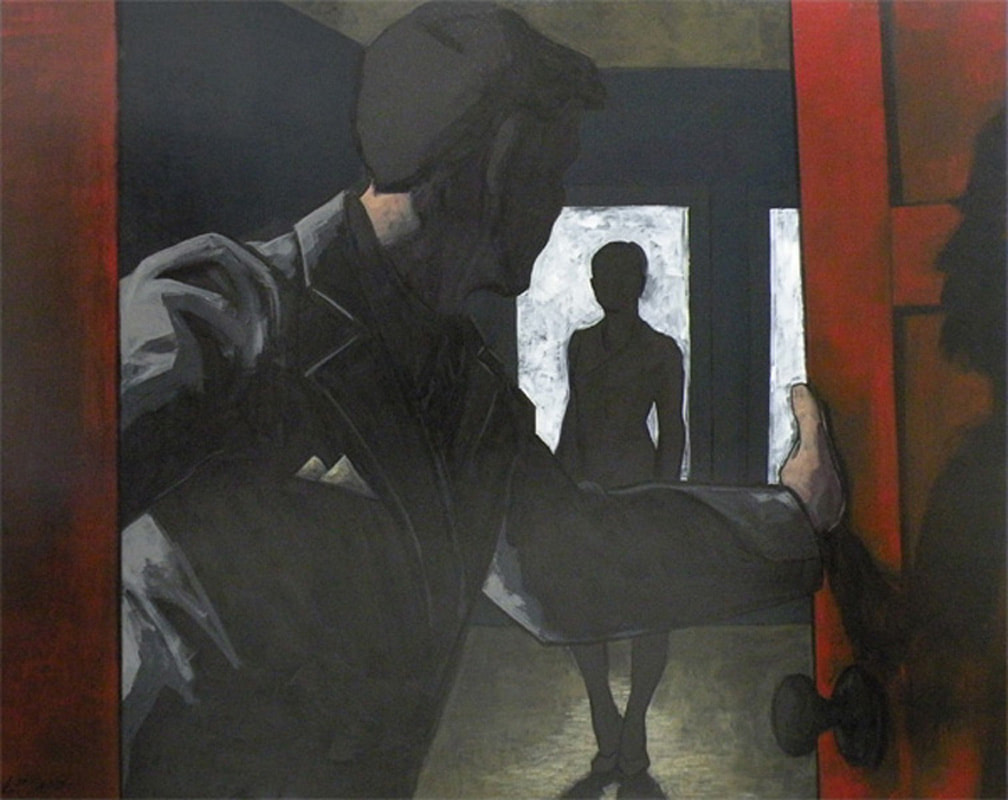 ©lesliepetersonsapp Backlight 38x48
Men have their own particular burden to carry. They are supposed to do, to achieve, attain, and win. But the world does not have a level playing field. Additionally, he knows that when the going gets tough, he's the one who is expected to run into the fray, stare it down and fix it. But what if it is unfixable?

The strive to win against all odds is often what motivates Antihero- or the giving up is what fuels his self-destruction.

The Homme Fatale
Not all Fatales are Femme.⁠ Any androsexual will tell you so.
But here we must ask the age-old question; is the catharsis we gain from art worth the messaging it perpetuates? 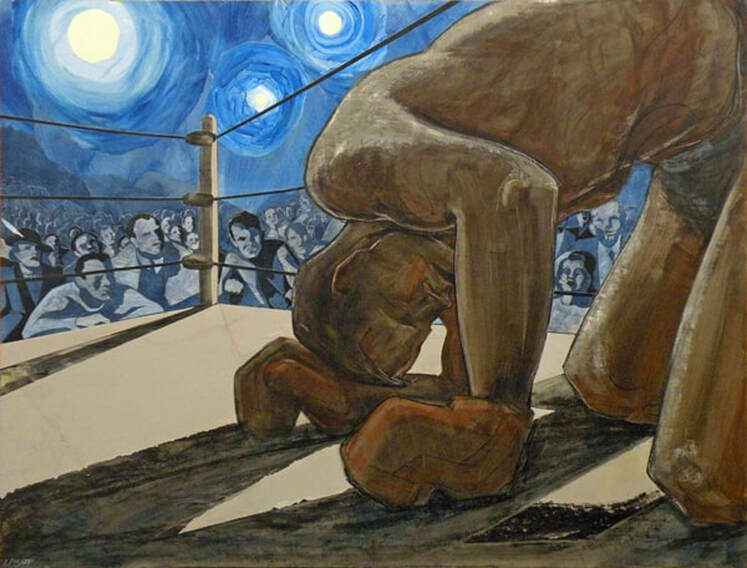 Why Noir? The Doomed Romance

A long time ago, a wise friend counseled me, saying “Romance is about NOT being fulfilled, it’s about longing.” 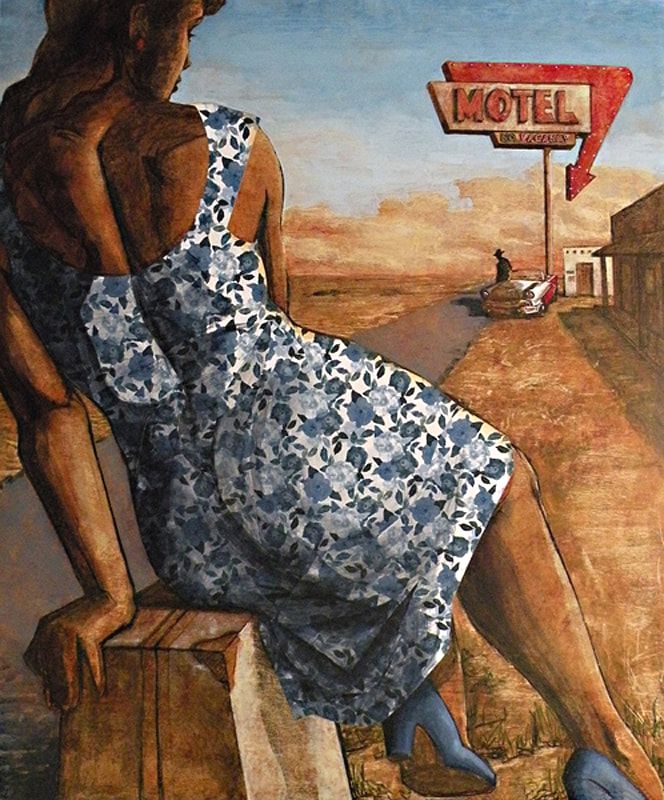 ©lesliepetersonsapp Vacancy 48x40
The characters in film noir practice a lot of bad behavior. They smoke and drink, lie, cheat, extort and manipulate.

Why Noir? It's Complicated

When we are engrossed in a mystery novel, the complicated plot tangles we must unravel keep us entranced. 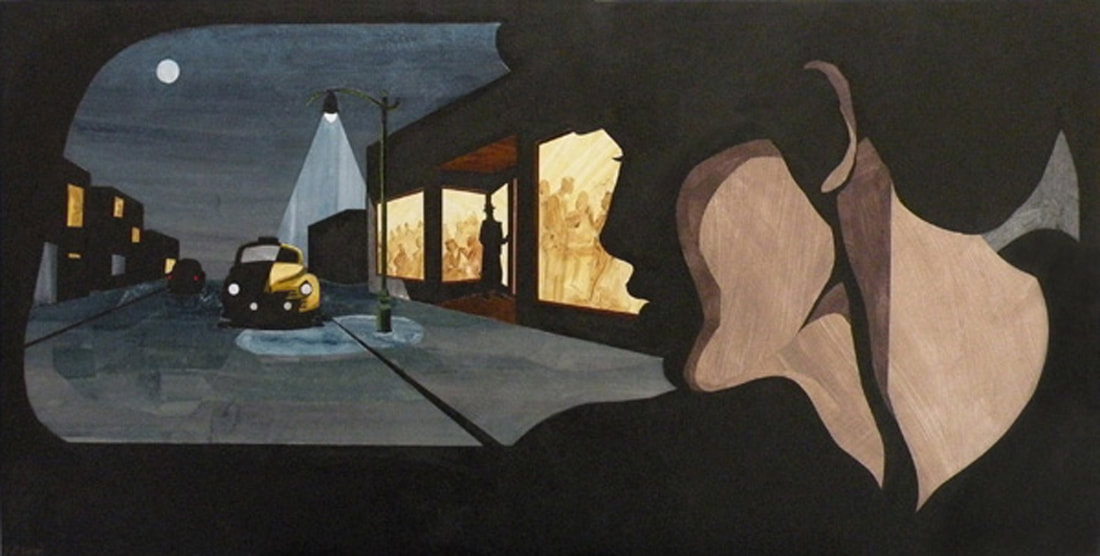 ©lesliepetersonsapp Pursuit 24x48
The characters in noir are caught in a web of intrigue and moral ambiguity. Their exploits involve daring and danger, plot twists and betrayals. They usually believe they can manipulate a situation to their advantage over another.

The dream I weave in my paintings is a version of myself who is, in a word: clever.

Like getting into a good novel or movie, my paintings invite you to take time and decipher what is being presented. 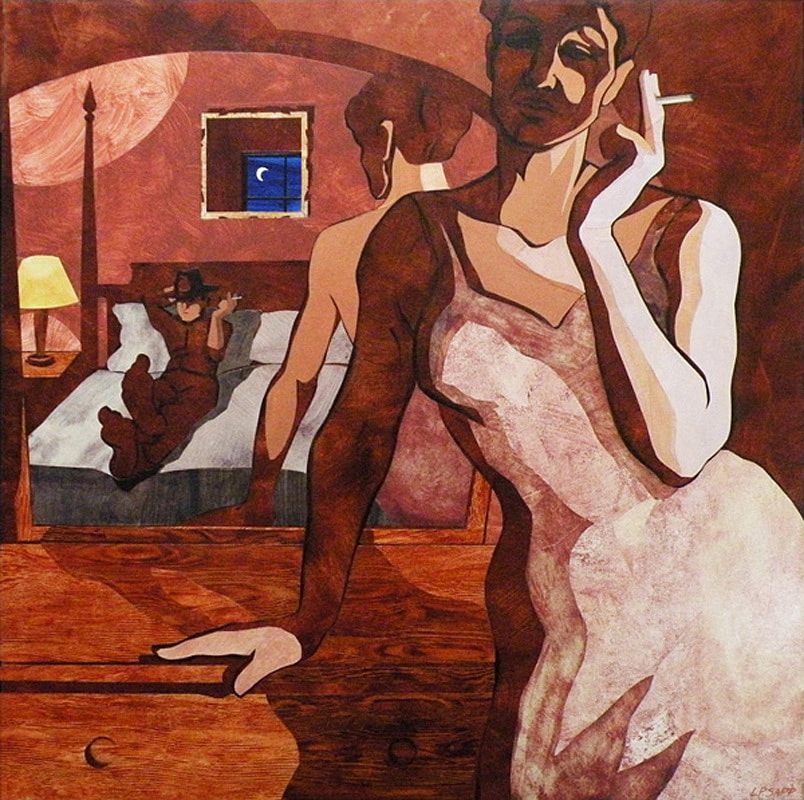 ©lesliepetersonsapp Many a Moon 38x38

Why Noir? The Unusual Suspects

Why is Shakespeare still so popular after all this time? It's because his stories and characters are timeless. There have been countless versions of his plays where the settings and characters’ identities are changed to bring new interpretations to the story presented.

There are a profusion of examples of crime novels that star characters of many kinds, from the famous private eye Easy Rollins, to tough gay guy/investigator Dave Brandstetter.

©lesliepetersonsapp Bars 16x20
The themes are universal and can be ascribed to any individual. So, I can change the outer identities of my characters, and it can still be noir.

To not follow these impulses would, in effect, be negating their existence.

Whether I handle this successfully is a question I continually ask myself.

The adaptability of film noir characters allows me to enlarge the limits of my understanding and expression.

Being an artist may look like fun, but it is tough.

Putting yourself out there for others to see is perennially disquieting. In order to make it all worth it, the subject and method has to be captivating.

In the words of the Czar of Noir, Eddie Muller, film noir is "suffering with style". 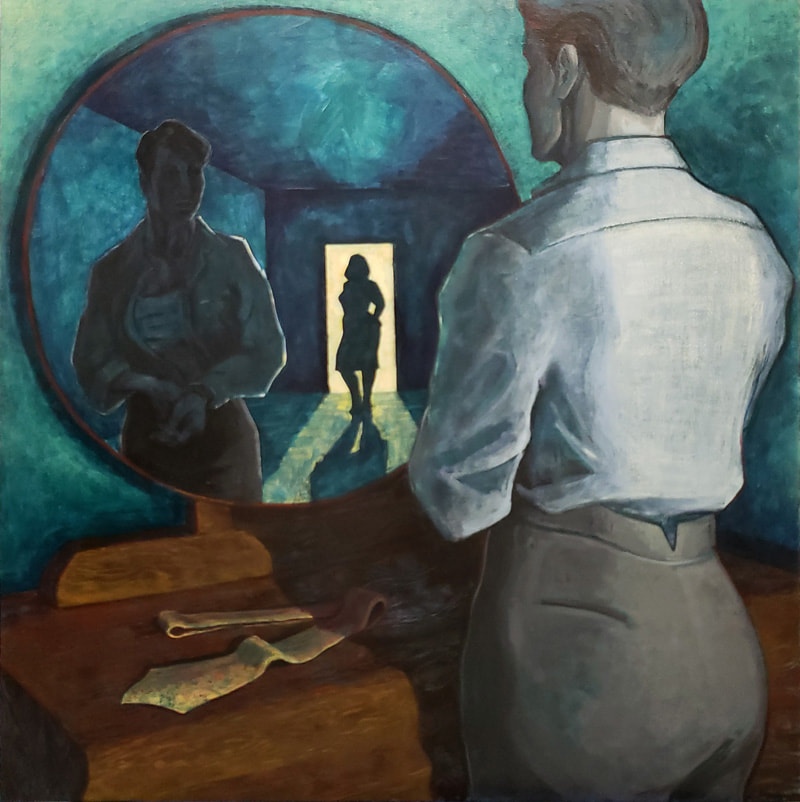